All Collections
Helpful Resources
Text to Columns to Separate Data

Text to Columns to Separate Data

Step-by-step guide to fix your messed up excel file

Written by Brian
Updated over a week ago

Data, Data Tools, Text to Columns can be used to separate data in a single column into multiple columns, such as if you have full names in one column and need a column with first names and a column with last names. When you select the command, a wizard dialog box opens to help you through the process. In step 1 of the wizard, select whether the text is Delimited or Fixed Width (see the next sections for definitions of Delimited and Fixed Width). In step 2, you provide more details on how you want the text separated. In step 3, you tell Excel the basic formatting to apply to each column.

If you have data in the columns to the right of the column you are separating, Excel overwrites the data. Be sure to insert enough blank columns to not overwrite your existing data before beginning Text to Columns. See the section “Inserting an Entire Row & Column” in chapter 2, “Working with Workbooks, Sheets, Rows, Columns, and Cells,” for instructions on how to insert columns.

Delimited text is text that has some character, such as a comma, tab, or space, separating each group of words that you want placed into its own column. To separate delimited text into multiple columns, follow these steps: 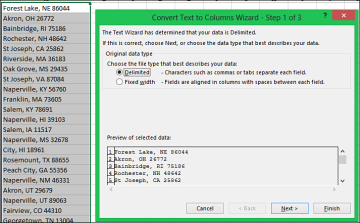 Figure 3.6. Select the Delimited option to separate text joined by delimiters, such as commas, spaces, or tabs. 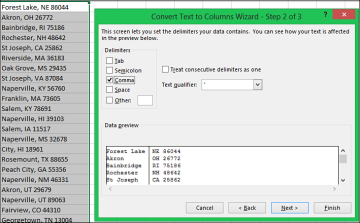 Figure 3.8. Using Text to Columns with a comma delimiter separated the city from the state and ZIP Code. Run the wizard again on the state ZIP Code column with a space as a delimiter to split up that data.

Fixed-width text describes text where each group is a set number of characters. You can draw a line down all the records to separate all the groups, as shown in Figure 3.9. If your text doesn’t look like it’s fixed width, try changing the font to a fixed-width font, such as Courier. It’s possible that it’s fixed-width text in disguise.

Figure 3.9. Use the Fixed Width option when each group in the data has a fixed number of characters.

To separate fixed-width text into multiple columns, follow these steps: 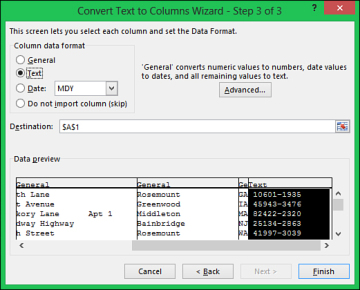 Figure 3.10. In step 3 of the wizard, set the format of each column. If you have numeric text, such as ZIP Codes, make sure you configure the wizard to treat the column as text so you don’t lose any leading zeros.

Did this answer your question?